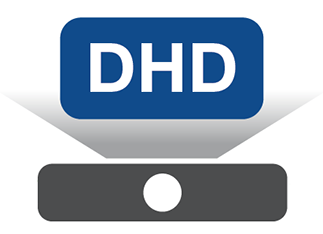 DDoS attacks remain a significant concern, and are a leading cause of business service outages facing organizations today. Such attacks threaten businesses of all sizes, and are often used as a smoke screen for more sophisticated and dangerous hacks or theft. DDoS attacks have evolved to be multi-layered and complex—it’s no longer about just attacking the network: the application layer is directly in the crosshairs. How quickly you discover and stop attacks is critical to keeping your business applications operational.

Network layer (or flood) attacks are best handled at the edge of the network, protecting the assets that are behind the firewall. But the usual defense of black holing or rate limiting can cripple the connections of legitimate users.

Application layer attacks, which are more sophisticated and targeted, require SSL decryption in front of app servers inside the network. Typical solutions are blind to SSL traffic and dependent on their placement in the network.

WAN bandwidth saturation shuts down your connection to the Internet. So any on-premises defense is useless against it.

Simply put, traditional point DDoS solutions are only partially effective because they focus solely on one type of attack.

A new depth of defense

It also delivers the highest performance with line rate capabilities and without impacting legitimate traffic.

Point by point—DDoS Hybrid Defender vs. the competition

In contrast with competing products, DDoS Hybrid Defender provides comprehensive protection for both the data center and the application. Here are a few reasons why it’s more effective than the competition:

Sophisticated attacks require a lot of processing. Other solutions don’t have the performance to simultaneously decrypt SSL, process traffic, and mitigate attacks in-line.

DDoS Hybrid Defender delivers a true multi-layered defense from a single box with a dual-mode appliance that supports both out-of-band processing and inline mitigation.

Enables a faster response to volumetric and blended attacks with a true, dedicated solution that stops attacks on your data center immediately and integrates with Silverline cloud services for sub-second off-loading. It also features unique layer 7 application coverage that even stops threats hidden behind DDoS attacks without impacting legitimate traffic.

Protection Against Mult-vector Attacks
Detect and protect against simultaneous attacks from layer 3 through layer 7.

Scalability
Protection against even the largest DDoS attacks at line rate.

Traffic Baselining and Auto Configuration
Baseline the traffic to automatically size the configuration.

Simplified Configuration and Management
Manage all DDoS settings from a single screen and only see the information important to you. Simplify configuration workflows for DDoS profiles, IP intelligence, virtual servers, and log profile setup.

Visibility into Attacks via Analytics and Reporting
Get current attack details like impact on throughput, CPU, and memory. Event logs provide both historical and recent attack data and mitigation details. Customized reports let you pinpoint the data you’re most interested in.

F5 DDoS Hybrid Defender delivers the best of both stateful and stateless security. The stateful capabilities help to detect and defend against the broadest range of layer 4-7 attacks including SYN Flood, SSL/TLS protocol attacks, and application low-and-slow attacks. These stateful capabilities are executed with the performance and resiliency of a stateless solution, providing the best of both worlds: intelligent, stateful protection with the dependability and scale of a stateless solution.

The dashboard provides your team with what they need to see, so they won’t waste time chasing down false positives. When action is required, your staff can take immediate mitigation actions with just a few clicks. Rapid, real-time updates show the mitigation results so that SOC staff can be assured the threat has been mitigated.

In addition to the standard security signatures, the solution creates dynamic signatures automatically—enabling faster and more accurate threat identification and blocking of evasive threats. These include low-and-slow and short, sporadic bursts of traffic that may go undetected. Security policy implementation is not a one-time procedure. F5 DDoS Hybrid Defender discovers and fingerprints new and unusual traffic patterns without human intervention, distinguishing and isolating potential malicious traffic from legitimate traffic almost instantaneously. Mitigation aggressiveness is based on sophisticated analysis of network and application stress. The aggressiveness of automated mitigations is determined using the current health of applications and networks. Real-time status is fed back to the mitigation engine, where mitigation signatures are automatically built, deployed, and analyzed for effectiveness. This reduces false positives and enables a “hands-off” automated protection cycle that continuously tunes and refines the precision of the mitigations as the attack continues or evolves—scaling mitigations up and down as needed.

Deploy Where You Need It Most

F5 DDoS Hybrid Defender eliminates common concerns with deployment, especially where network architectures are more complex. It offers an interface designed for the security professional, and a simplified “out-of-the-box” experience—with automatic sizing and configuration of DDoS protection features. Its flexible deployment options enable DDoS protection services to be easily deployed within the data center as a physical or virtual appliance, directly in the path of traffic or out of band for analysis of traffic behavior. 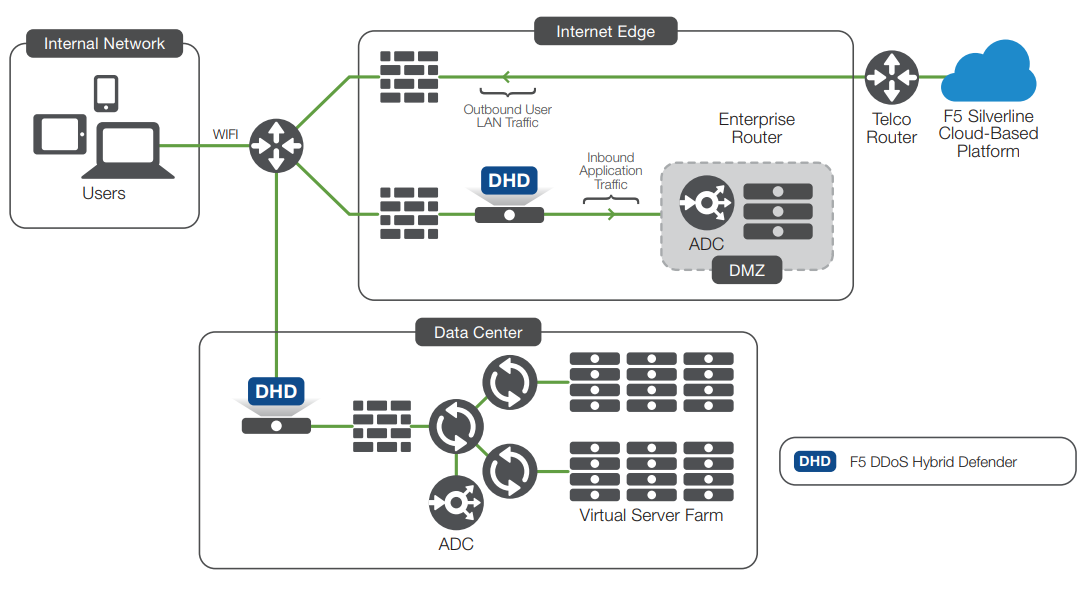